Cyprus is an educational HUB

Cyprus currently has 43 private institutions of secondary and tertiary education, which are registered with the Ministry of Education and Culture and operate following the Laws of the Republic of Cyprus.

What can educational institutions offer to the student?

Cyprus's secondary and higher institutions can undoubtedly provide high education and training standards by equipping the students with the necessary knowledge and skills, preparing them adequately for their professional courses in the modern and demanding global market.

Study in Cyprus pole of attraction…. 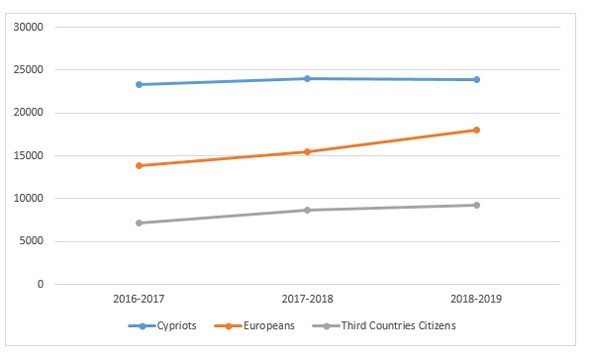 The number of enrollments of students in Cyprus is increasing every year. The following diagram shows the number of apprentices enrolled in various educational institutions in Cyprus and originating from Cyprus, Europe and other countries for the academic years 2016-2019.

A leading educational center in Europe

Three of Cyprus universities are ranked among the 500 best universities in the world as private institutions/universities operated for over 50 years, winning global awards and accreditation.

All the private educational institutions of Cyprus in the last decade have succeeded in gaining huge recognition worldwide, where students can transfer credits to any other university internationally. A wide range of courses and curricula are taught in English and Greek at public and private universities.

Usually, the duration of studies is not more than 4 years, following the American educational model where the student attends compulsory courses and courses of his choice. In addition, students can attend courses offered by specific professional bodies such as ACCA or ICAEW.

Many well-known universities from all over Europe and the United Kingdom offer recognized degrees in the higher education institutions of Cyprus through representation agreements.